We take our societal and ecological responsibility seriously. Therefore sustainability aspects have top priority in our daily work—not only at our workplace and in our supply chains but also with regard to our products and services. We also initiate and support environmental protection and social projects. 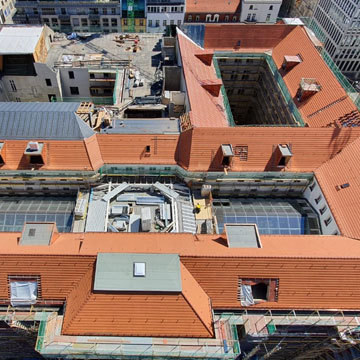 Saving lives through the use of signals

Saving lives through the use of signals

In the event of an industrial accident or fire, swift action is required. Doctors, paramedics, and firefighters have to be informed immediately and directed to where the accident occurred. Depending on the construction projects’ size and character, such procedures can be particularly difficult. As a result, the HOCHTIEF team who is working on the PPP revitalization project “Mauerstrasse” in Berlin—where, among others, the “Federal Ministry of Health” (BMG) will move in—has opted to use a modern radio system. It was installed on the building’s power distributors in the emergency stairwells and can pinpoint the location of injured people or the source of a fire on the 70,000-square-meter construction area precisely and without delay. Thus, help can be provided quickly in case of emergency. 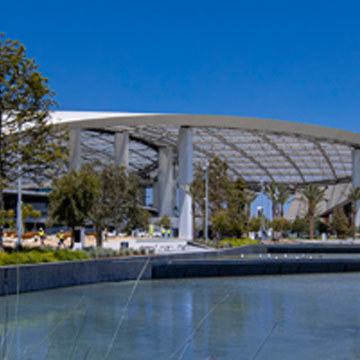 The SoFi Stadium in Los Angeles which HOCHTIEF company Turner completed as part of a joint venture for the American football teams, the Los Angeles Rams and Los Angeles Chargers, has a number of impressive features: The gigantic roof whose unusual geometry gives it an ultra-modern look, is the project’s greatest attraction. Its unique design unites all parts of the structure into a harmonious whole.

The roof panels let plenty of natural light into the interior of the stadium, and this transparent material is approximately only one percent the weight of glass. Turner and AECOM, two of the world’s biggest construction providers for sport facilities, worked together on this stadium. The exceptional sport and entertainment venue has been designed to meet the LEED Gold standard for stadiums. 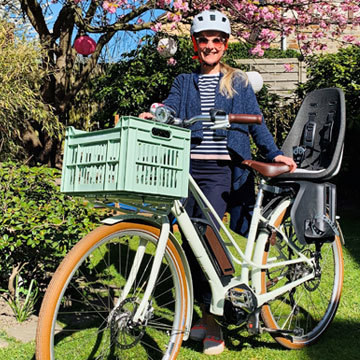 Getting on the bicycle

Getting on the bicycle

HOCHTIEF employees are participating in campaigns which raise awareness for sustainability, mobilize people and encourage rethinking. For instance, every year numerous HOCHTIEF teams in Germany participate in the nationwide campaign “Stadtradeln” (City Cycling): For a period of three weeks they consciously get on their bicycles and do without a car. That cuts greenhouse gas emissions and saves costs for gasoline, and also increases fitness.  Cycling is an effective way of avoiding traffic congestion, particularly on busy routes. And because cycling has so many advantages, an increasing number of HOCHTIEF employees also take up the offer of a job bicycle, whereby the company supports the procurement of a bicycle. 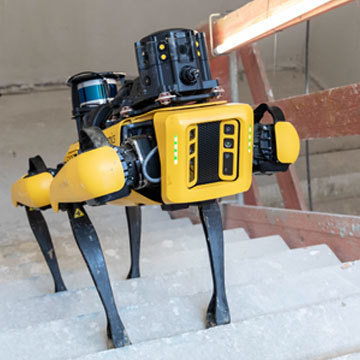 Using digital data and models with their wide range of improvements for design and construction is a direct contribution to environmental protection. Here HOCHTIEF works together with its innovation company Nexplore on numerous issues, in order to deploy Artificial Intelligence, Industry 5.0 or Blockchain in the construction industry.

A robot is also being used at the CIMIC subsidiary CPB Contractors: During construction work on a section of the ring highway M80 in Melbourne the team is using the completely autonomous inspection robot Matey, in order to view lane markings and perform surveys. Matey is controlled via a tablet from a safe observation point—he also contributes to improving construction site safety through the reduced contact of personnel with flowing traffic. Since the robot can be operated on different surfaces, such as asphalt, grass and soil, it is also going to be used on other projects of CPB contractors. 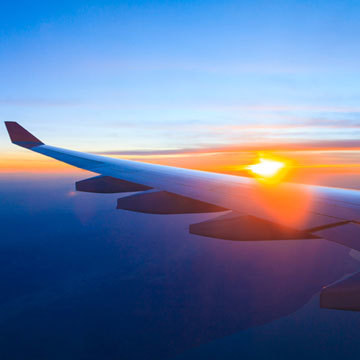 Of benefit for local residents and companies

Of benefit for local residents and companies

The project employed over 2,700 people from the region, and 90% of construction materials were sourced from suppliers in southeast Queensland. Such vicinity not only strengthens the businesses and thus the local economy, but also makes for shorter distances and thus less emissions on transportation routes. 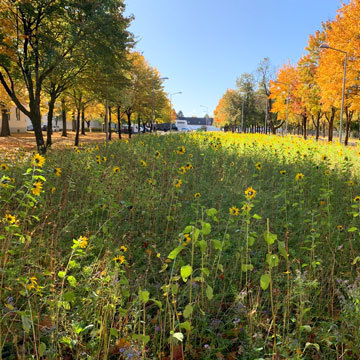 With the PPP Goes Green initiative, the experts at HOCHTIEF PPP Solutions aim to deliver environmental improvements both for project users and for the natural surroundings. In several PPP (public-private partnership) projects, for instance, wild meadows have already been sown to attract bees and a variety of insects. Because the significance of bees for biodiversity and food security Is elementary for mankind. One example is the meadow at the Fürst Wrede barracks in Munich. 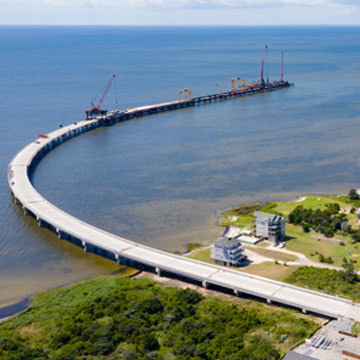 Out and over the Atlantic

Out and over the Atlantic

Rodanthe Bridge in North Carolina creates a nearly 3.9-kilometer, arc-shaped bypass for the State Route 12. Up to now, this has traversed the Outer Banks, a sandy embankment comprising a route increasingly prone to severe erosion and overwash—not to mention growing volumes of traffic. The new bridge raises the highway above sea level. Flatiron is deploying innovative methods in construction to keep the negative impacts on the environment as low as possible. After all, the Outer Banks are environmentally sensitive lands. To meet these challenges, Flatiron developed, for example, the Advancing Rail System, which combines the ability to straddle the newly built bridge structure and to leapfrog temporary work sections. In addition, emphasis is put on the use of precast elements throughout the project: precast piling, caps, girders, deck panels, among others. In this way, the ecological footprint of the construction works can be reduced to a minimum. 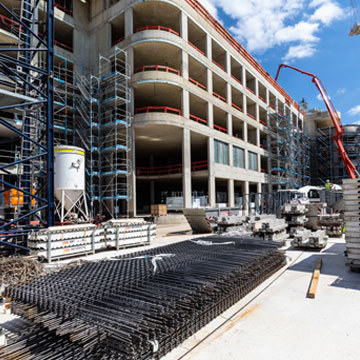 The Heinrich Campus in Düsseldorf is an office complex with 40,000 square meters of office space being built for Deloitte, the auditing and consulting firm. Encouraging commuters to leave their cars at home, parking space is provided for 500 bicycles combined with changing and washing facilities as well as a workshop for quick bike repairs. Recycling-friendly, easily dismantled materials and the use of regenerative resources further enhance the project’s sustainability credentials. The building is expected to achieve a DGNB Gold certification. 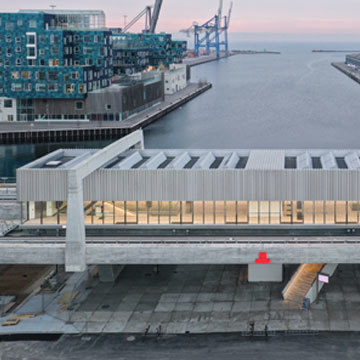 Future-proof: Under a construction joint venture, HOCHTIEF has completed the subway link to Copenhagen’s Nordhavn. The new M4 line connects the downtown Cityringen—the City Circle Line—with the Nordhavn urban development. With the clients aiming to build the most eco-friendly subway in the world, we contributed among other things by reusing 3.1 million metric tons of excavated material as backfill in Nordhavn in order to reclaim land for the expanding metropolis. The metro line also features architectural highlights: Its Orientkaj Metro Station won the Sustainable Concrete Award 2021 of industry organization Dansk Beton. The attractive, almost hovering structure has been given a simple, light-weight design. Other sustainable aspects are its small footprint and the concrete’s longevity. HOCHTIEF is now working on the Sydhavn line at the other end of the city. 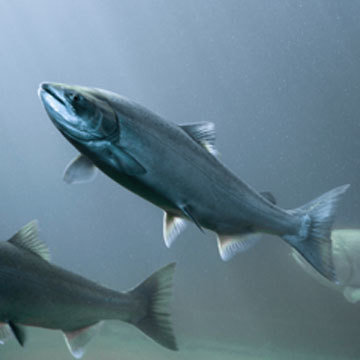 In the USA there is a certification for the safety of fish stocks, the “Salmon Safe Certificate”—and Turner places great value on this qualification.

Salmon Safe particularly focuses on wild salmon stocks and their habitat in the North Pacific. Amongst other things, the specific aim is to avoid polluting natural waters in the vicinity of the project during the construction phase, prevent sedimentation as well as conserve natural resources and reduce CO2 emissions. The Seattle office of HOCHTIEF’s subsidiary Turner is now also certified, because the team integrates water protection plans in every project. 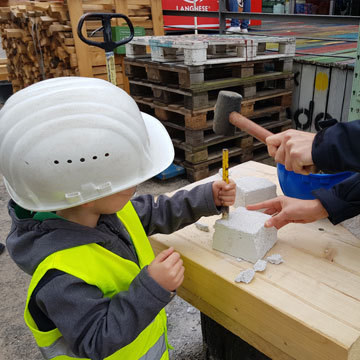 Having a go at building: Little visitors to the Explorado Children’s Museum in Duisburg were able to try out their construction skills. Supported by HOCHTIEF, the children’s museum offered a hands-on building site in 2020—of course outdoors under corona conditions. HOCHTIEF supported this engagement with full conviction and provided the site fences. The initiative was in line with the Group’s key areas of sponsorship:“Education and the promotion of young talent” and “Design and preservation of living spaces”. And who knows—maybe some day one of the kids who have tiled a roof or paved a path there will take on a career in the construction industry? 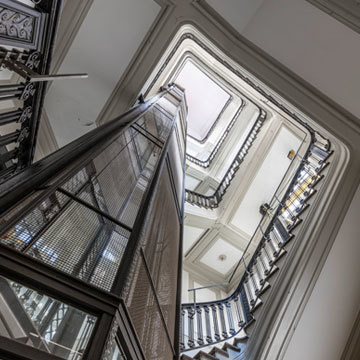 For the PPP revitalization project in Berlin, HOCHTIEF is refurbishing a landmarked building ensemble to the German Assessment System for Sustainable Building (BNB)’s silver-certification criteria. This requires suppliers and subcontractors to enter the materials to be used in a database, so that quality, standards, and material certifications can be checked in terms of the economical use of materials. Only low-emission materials are purchased and used—including floor coverings, insulation, and wood paneling. 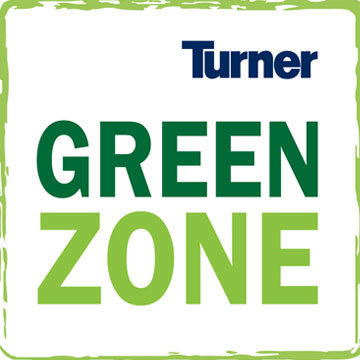 Welcome to the Green Zone!

Welcome to the Green Zone!

Since 2011, Turner has regularly analyzed the workplace situation of its employees in the in-house Green Zone competition. The initiative is about measurable processes to improve health and working conditions on construction sites and in offices. The teams must answer questions in categories such as Well-being and Environmental Quality, Recycling and Waste, Water Efficiency, Energy and Atmosphere, and Innovation and Design. The competition is very popular and sees an ever increasing number of entrants that achieve designation as a Turner Green Zone in this way. 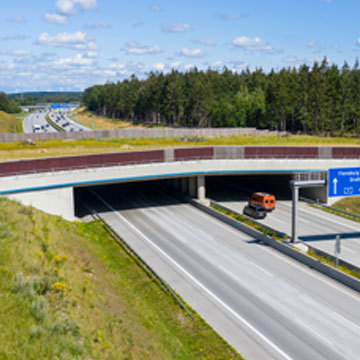 Highways can also be green: During the expansion of the A6 highway in southern Germany, for instance, HOCHTIEF created extensive new natural habitats that offer a new home to, among others, endangered animal and plant species. The percentage of materials recycled on this project, which HOCHTIEF is realizing within the framework of a public-private partnerships, was especially high. For example, roughly 90 percent of the old Neckartal Bridge was processed and reused as construction material for roadworks.

With the A7 highway from Hamburg to the highway junction Bordesholm in Schleswig-Holstein, HOCHTIEF has expanded one of Germany’s most important traffic arteries. As part of this upgrade and within the framework of joint ventures, noise protection tunnels were built there (Schnelsen, Stellingen), reducing noise and thus considerably improving the local residents’ quality of life. Parks and small gardens are being built on top of the covers. In this way, the project will bring districts together which have been separated by the highway for decades. The project also comprises construction of two green bridges that will make it possible for animals such as red deer to cross the highway safely.

HOCHTIEF also focuses on green aspects during operation of the PPP project SAAone (A1/A6) in the Netherlands, which comprises around 20 kilometers of highway and 60 civil structures. A “Green Team” made up of representatives from the joint venture, the operating company and the client develops new ideas and concepts on the subject of sustainability. Among others, more than 2,000 traditional lamps were replaced with LED lighting, which saves around 350 tons of carbon dioxide per year. 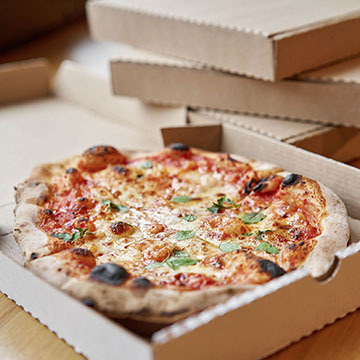 Saying thanks and giving back

Saying thanks and giving back

During the Covid-19 pandemic, it became particularly evident what an important job medical staff are doing. In March 2021, the employees of Turner New Jersey in the USA therefore donated money, thus providing a total of 565 meals to front-line medical workers at three local hospitals—an expression of thanks for their tireless commitment.

Part of the USD 7,055 total was donated to the Community Food Bank of New Jersey. The Turner team’s contribution is meant to help people who have been impacted by the economic downturn, as well as those who suffer from food insecurity on a daily basis.